The ASX200 index rose 7.6% in a strong quarter to close at 6,195. Australia’s economic outlook continues to improve with growth expected to continue on-trend this year. The Reserve Bank of Australia (RBA) maintained the cash rate at 1.50% p.a. for a record 22 consecutive month. US Stock markets returned to growth this quarter with the DOW increasing 2.7% and the S&P 500 growing 5.3%. US interest rates continue to increase, up another 0.25% this quarter to 2.0% p.a. with the market expecting another increase of 0.25% this year for a total increase of 0.75% for the year.

The managed funds that make up the Limberg Asset Management Investment strategies have performed well over 3 month, 1 year and 3 year times. The table below shows the performance over these time frames for the managed funds. 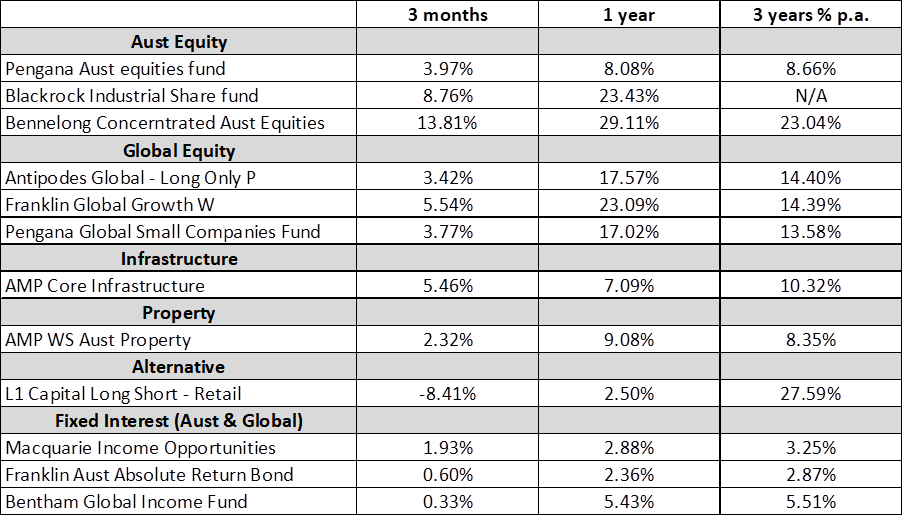 Global Equities: each of the global investment fund managers performed strongly over each time frame, all out performing the MSCI global index Ex AUS which returned 15% for the year. Each fund has a different investment style and approach which adds diversification into the global portion of the investment strategy.

Infrastructure: The AMP Core Infrastructure funds has maintained its consistent performance. The major unlisted holdings reduced volatility and provided consistent returns. The largest unlisted holding being Melbourne airport. The listed portion of the fund also contributed to positive performance and provided liquidity. The fund is run by AMP Capital which is a separate entity to the AMP Financial Advice which has been in the headlines with the Banking Royal Commission.

Property: The AMP Property fund had a solid return of 9% for the 12 months. This was made up of 6% income and the balance growth which has been a key feature of the fund being able to provide consistent regular income and growth. The fund was debt free up until recently but has since increased its debt to fund some opportunistic purchases. Like the infrastructure fund it is run by AMP Capital which is a separate entity to the advice side of AMP.

Fixed Interest: Fixed interest has contributed to performance as a cash alternative with defensive characteristics when the equity market is volatile. The Macquarie Income Opportunities and Franklin Australian Bond fund provided better then cash returns. The Bentham Global Income fund was introduced towards the end of the year to enhance the returns in this asset class.

Alternative: The L1 Capital Long Short fund was added to the investment strategy in April and the positions size was increased in May and June. The position size however still remains a small portion of the overall investments strategy. Over this period the fund has under performed which has been inconsistent with the long-term performance of the fund. The fund has the ability to make short trades which allows it to profit when they identify weakness in stocks, sectors or economies. This has the potential to be beneficial when there is volatility in the market or a correction. While the performance has been disappointing over short term the management team are focused and confident in turning this around.